The Greer Christmas Parade brings more than a parade to the community!

The Greer Christmas parade to benefit Greer was happy to host 92 units in this year’s parade. Greer Relief estimates over 1,800 people (and a few dozen animals) were involved in the parade; including participants, volunteers, 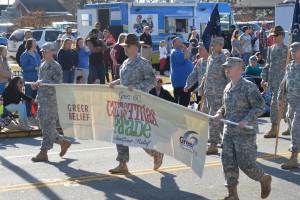 and City of Greer employees. Beauty queens, Greer and Blue Ridge marching bands, and cheerleaders entertained the crowds. Interspersed were floats representing businesses and trucking companies, who had their rigs delicately maneuvering down Poinsett to South Main Street, where the parade ended at the J. Harley Bonds Career Center. The festivities are held in conjunction with a weekend of activities organized by the City of Greer and Greer Station Association. 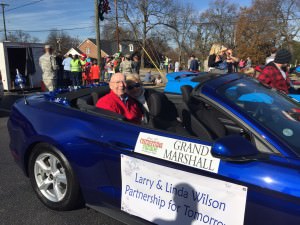 The support of sponsors and participants, helped to raise over $10,500 to benefit Greer Relief, plus in-kind support from “Parade Sponsor” the City of Greer valued at over $7,200. The Greer Christmas Parade was happy to provide a travel stipend sponsored by Greer State Bank to both Blue Ridge and Greer bands. “This is important, to give our bands a little help to get to the parade. It takes a lot for them to bring the band and it wouldn’t be the same without them.” stated Caroline T. Robertson, Greer Relief Executive Director. Greer State Bank also sponsored the big man himself, Santa!
Grand Marshals Larry Wilson, Chairman of Partnership for Tomorrow, and his lovely wife Linda were chauffeured by the Mustang Club. Larry was Vice President of State Auto Insurance Companies, and after forty-four years of service, he retired and shifted his focus to the future of Greer through Partnership for Tomorrow.
Th 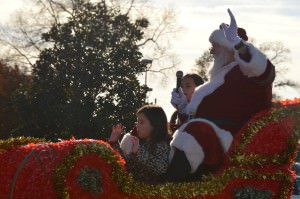 e entire community comes together for the parade and is very proud of this annual tradition. Kyndra Kemp, Parade Chairperson, stated, “It was a perfect day for a parade!” Three Parade Judges – Tim Lincolnhol of Greer State Bank and President of the Greer Relief Board of Directors, along with local supporter Megan Chulkas of The Clock of Greer and TV host Jamarcus Gaston of Studio 62 on the CW – judged the floats on theme, originality, professionalism and, of course, crowd appeal; and what a crowd there was surrounding the announcing platform at Greer Baptist Church. Emcees Robert Gravley, Steven “Worm” Gay, along with Greer First Minister of Music Dave Dupree entertained the crowd while the judges made their decisions.

CONGRATULATIONS TO OUR PARADE WINNERS!!