Greer Relief is excited to announce that this year’s Greer Christmas Parade Grand Marshal will be David Wilkins. Wilkins was appointed by President George W. Bush to serve as the United States Ambassador to Canada between May 2005 and January 2009.

Wilkins was born and raised in Greenville, SC, attending Greenville High School and Clemson University. He continued his education at the University of South Carolina to earn his J.D. degree and then served as a first lieutenant in the United States Army. In 1980, he was elected into the South Carolina House of Representatives, eventually holding the speakership for 11 years. Wilkins is currently a partner at Nelson Mullins Riley & Scarborough LLP in Greenville.

For the first time, Greer Relief will be hosting a toy drive during the parade. There will be multiple donation boxes located along the parade route. All donations will be used to stock Greer Relief’s Christmas Morning Shoppe (CMS). CMS is an innovative Christmas giving program where families attend classes through Greer Relief’s RENEW program to earn rewards. The rewards are then redeemed for an appointment in the Shoppe where families then pick out gifts for their children. Infant-18 year-olds are eligible for the CMS program. All new gifts are appreciated. Donations can be brought to Greer Relief, to the parade, or shipped directly to Greer Relief through the CMS Amazon Wishlist: https://amzn.to/30MLAwH

The Sensory Safe Zone will be available again this year, creating a safe space for adults and children who experience distress in times of sensory overstimulation. This area will be on the first block of the parade route, between Memorial Drive and Hubert Street. Those in the parade will be asked to refrain from revving their engines, using horns, sirens, or whistles. The Sensory Safe Zone is open to all, but those who choose to stay in this area must respect the expectations of the space. 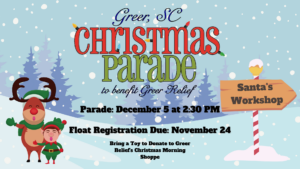 This year’s parade theme is “Santa’s Workshop.” Participants will be decorating their entries to reflect their interpretations of what goes on behind the scenes for Christmas. Judging entries this year will be Scott Harke, President of the Greer Relief Board, Deb Mastny, owner of Olive’s Branch Gallery in Greer, and Shana Tharan, General Manager of the new Hampton Inn by Hilton Greer Greenville.  A special thanks goes out to those who have invested in this event:

Parade Sponsor: The City of Greer

The parade will be livestreamed and recorded for those unable to make it in person.