Greer Relief announced today that the 2017 Grand Marshal is Justin Ludley, Greer High School Principal. Principal Ludley, his wife Barrett, and their oldest child James (3 y/o) will lead the parade through Greer on Sunday Dec. 3rd at 2:30 PM. Justin and Barrett’s 6-month old triplets (Tess, Anna, and Will) will be “resting” at home. The entire community comes together for the parade and is very proud of this annual tradition. The festivities are held in conjunction with a weekend of activities organized by the City of Greer & Greer Station Association. Join us in #hereinGreer to kick off the holiday season! The parade will draw residents and visitors from all around the state to enjoy what always proves to be a joyful holiday experience.

Justin Ludley is from Jonesboro, GA. He was hired by Marion Waters as a math teacher for 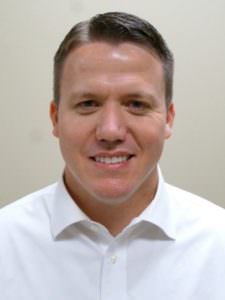 Greer High School in 2006 where he served as a math teacher, assistant football coach, and assistant baseball coach. During his first tenure at Greer High School, Mr. Ludley obtained his Masters’ degree in School Leadership from Furman University in 2011. In 2012, he was hired as an Assistant Principal at Southside High School till 2016. He continued his graduate education during this period and graduated with an E.d.S degree in School District Leadership from Furman University in 2017. In 2016, Justin Ludley was hired by the Greenville County School Board as Principal of Greer High School. In the last two years, students and staff have shown great dedication to service for the Greer community. Led by the Student Government, students and staff raised over $20,000 during Spirit Week of 2016 for Greer Community Ministries and over $26,000 during Spirit Week of 2017 for Greer Relief. Mr. Ludley is honored and thrilled to be able to serve in such wonderful community.

The 2017 Greer Christmas Parade “Christmas at the Movies” will feature over 90 parade units including numerous businesses, clubs, organizations, churches, schools, dignitaries, and 2 marching bands in the parade lineup. As always Santa Claus will be the featured guest of the parade. Judging this year’s parade is Greer Relief Board of Directors President: Walter Bennett from Pelham Medical Center; Community Partner: Chris Manley from Engenius; and Senior Class President & Spirit Week Leader: Hannah Perry. A special Thank You! goes to the following organizations for investing in this festive tradition:

The parade lineup will be available on https://greerrelief.org/featured-events/ Friday, December 1st by noon.

The parade will be recorded & posted on our YouTube Channel! Tag and tweet your favorite Christmas Parade photos for a chance to win a special Christmas treat from Greer Relief! #2017GreerChristmasParade #hereingreer Have fun and enjoy the parade! Merry Christmas!

Join us for the Annual Greer Christmas Parade!!